Ahmet, Kim and I went to watch a Kabuki (歌舞伎) play at the National Theatre 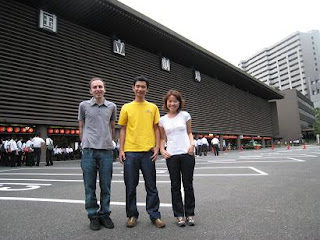 Fun experience. Kabuki is a form of Japanese opera where men dress up as women in the play. (I have no idea why they do so, but the "female" character's voice sure sounded weird)
The theatre has a very high-tech stage

This is one of the "exciting" fighting scene... so dramatic...

The rest of the play was pretty much like the next video:

For those who know japanese: Do u understand a single word they are saying???

Its no wonder so many pple fell asleep in the theatre. haha.

Did u also realise how weird the female character(a guy) sound?